Now this looks like fun, reminiscent of John Wick’s Cat. 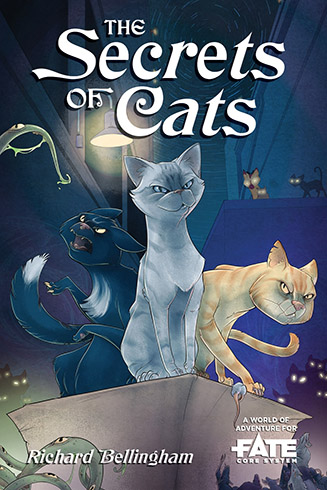 The Secrets of Cats: A World of Adventure for FATE CORE is an urban fantasy/horror setting for use with Evil Hat’s FATE CORE and FATE CORE ACCELERATED in which the players take on the roles of sentient mystical felines who save mankind from the powers of darkness!

I’m not a fan of being scared. I had to hide behind the couch when the Six Million Dollar Man met up with Bigfoot. That said, I’ve learned to enjoy a bit of creepy tone in my dramatic tension. My most memorable creepy game was the Wake of the Watcher module from Paizo’s Carrion Crown adventure path that I had the pleasure of playing from the second module to the end.

Wake of the Watcher cover

The Watcher module features creepy townspeople, a creepy cult, creepy monsters of the squishy, insanity provoking outsider types… fun stuff. That said, I was happy to move on from that adventure to something smelling less of dead fish. Or was that Oberon’s armor that smelled?

My autographed copy of Hoard of the Dragon Queen finally arrived!

Hoard of the Dragon Queen, autographed

I’m waiting until I have time to read and savor it. But soon, my pretty, soon.

I’m taking Autocratik’s RPGaDAY topics out of order. My favourite RPG that no one else wants to play was also one of my convention purchases, Blue Rose, designed by John Snead, Jeremy Crawford, Dawn Elliot, Steve Kenson and John Snead.

Welcome to the world of Blue Rose, a fantastic reality where brave women and men, gifted with arcane powers, live and work side-by-side with intelligent animal companions. The heroes of the peaceful Kingdom of Aldis strive to uphold the ideals of fairness, justice, and equality, while protecting their homeland against its aggressive neighbors.

It was the first game to use what become the True20 system, based on the Open Game License from Wizards of the Coast; a sort of d20 light. But what really draws me to the game is the setting. If you aren’t familiar with the genre of Romantic Fantasy, John Snead offers some good background. I was drawn in by the artwork and opening fiction, and then started reading the novels cited in the inspired by sidebar; series like Mercedes Lackey’s Heralds of Valdemar and Vows and Honor. These stories feature societies of high ideals, and heroes who work as part of a larger effort, against aggressors without and corruption within. They feature magic, psychic abilities, intelligent animals, and romantic connections among characters.

Some criticize the heavy hand with which liberal social ideals are venerated. I heard them called “wish fulfillment rather than fantasy.” But to me, there’s something powerful about the emotional weight of the stories, with their emphasis on connectedness and hope, honor and sacrifice.

I’m not sure d20 is particularly suited to this kind of storytelling. The game does implement a light and dark nature attribute for characters, as well as a corruption mechanic for those who dabble in foul sorcery. But I have yet to actually play it. I still cling to the hope that someday, I’ll find a group of fellow romantics who will indulge me.

Whenever we go to Barnes & Noble, we visit the used section. Last month, I found some Transformers graphic novels that were helpful in keeping NatureBoy occupied during some of the long waits during CraftyMomma‘s graduation.

Recently, NatureBoy and I were looking through the RPG section. It really pales in comparison to our Friendly Local Gaming Store, Quarterstaff Games (website needs work, but the store is great). When CraftyMomma found us, she had picked up the Mutants & Masterminds Freedom City supplement in the used section. That’s awesome on so many levels!

Tonight, I’m getting together with some of my friends to play 7th Sea, a role playing of of swashbuckling high adventure set in a fictionalized 17th century Europe.

I’m playing a Castillian (i.e., Spanish) guitar instructor to the court of Elaine of Avalon (Britain) and a skilled swordsman. I’m also a member of the secret society of Los Vagos — freedom fighters like Zorro who protect common folks from the inquisition and the beleaguered young King from political rivals — but that backstory isn’t likely to come into play in this adventure. We’re seeking a magical compass that may allow ships to navigate the mystical 7th Sea (imagine a roaming Bermuda Triangle).

7th Sea is written by John and Jennifer Wick, and has a really interesting core mechanic. You have several base abilities called Traits (brawn, finesse, wits, resolve, and panache), and then Skills and Knacks. To resolve a conflict or test in the game, you roll a number of d10 dice equal to the sum of your Trait and the appropriate skill/knack. You then “keep” a number of dice equal to the Trait (the ones that rolled high, of course).

So, if I need to leap to grab a chandelier, and I have a brawn of 2 and a leaping knack of 3, I would roll 5 dice and keep the highest 2 (written as 5K2). So the skills contribute to higher rolls, but the Trait is the limit on how high a total is possible. Except that a rolled 10 “explodes;” you get to roll again (and maybe again…) and the sum of all the exploding rolls add to the value of the first d10, so it counts as one really big die roll that you can keep.

There’s also sorcery, political intrigue, mysterious ruins, and loathsome monsters. And there’s a drama dice system for rewarding risk-taking and good role playing that can work for both the players and the storyteller. All in all, our short campaign has been a lot of fun. Tonight is supposed to be the concluding session.

I’m thinking about offering to run Dogs in the Vineyard for a while if folks are interested in continuing to get together.